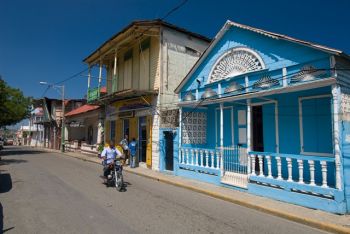 Christopher Columbus was Puerto Plata’s first tourist. He sighted the port in 1492, and its shimmering waters inspired him to christen it “Port of Silver.”  In 1496, Columbus brother Bartholomew officially founded the city, naming it San Felipe de Puerto Plata. The city’s development was enhaced during the governorship of Nicolas de Ovando who in 16502 made a concerted effort to turn this natural harbor to the Crown’s advantage. The port continued to grow, and in 1508, it was granted an official coat of arms by the king of Spain.

At first, Puerto Plata flourished as a major trade center for the Spanish colonies. However, with the discovery of new and richer lands, commerce slowly died.  By 1520, the city was financially ruined. The citizens of Puerto Plata turned to the more profitable business of smuggling.

Soon, Dutch and French ships were bringing in shiploads of European-made goods and trading them form hides, livestock and foodstuffs.  When word of the illegal trading reached the Spanish Crown, the city was ordered destroyed and its citizens relocated to the southern regions of the islands.  However, smuggling activities continues well into 17th century.

The city of Puerto Plata was officially abandoned until the second half of the 18th century, when the port was once again opened to merchant vessels. It enjoyed another brief period of prosperity in the second half of the 19th century. The city’s latest boom began some 20 years ago, when its natural beauty and dun-drenched beaches were seen as ideal for resort development. Today, Puerto Plata is one of the leading tourist destinations in the Caribbean.