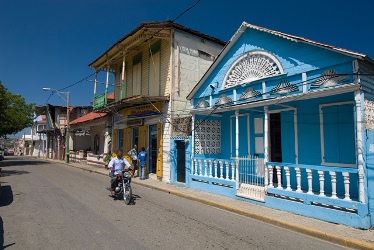 The culture in Puerto Plata is very different to the rest of the country, here it is a way of life.  Here we have seen men like Eduardo Brito, who although unable to read or write had the ability to sing Rigoletto, and do so very well, but then  self education will often come as a surprise to the more developed and educated countries.

The atmosphere of freedom, the passage of people with different opinions, of musicians, poets, artists, businessmen and adventurers who chose to live here, made this a really "enchanted" town.

The richness of the town's history is portrayed in it's monuments, the Victorian houses, it's bohemian customs and nightlife, it's patriotic exploits and in the character of the people who created this miracle in less time than in any other part of the world.  This was helped, of course, by the beauty of the area's beaches and the investments made there.

In Puerto Plata many of the most important citizens were not born here, for example José Dubeau and Mary Lithgow.  But they spent all their life here and are buried here too. Others, like Colson and Brito, chose to come and go, travelling the world and returning here to rest and eventually to be buried in the place of their birth to remain here throughout eternity.

The residents today have the good fortune to live in a city where the culture is the most interesting of the whole country but they still face the challenge of receiving, as they have always received, the outside world and its invaders without being overcome or subjugated.

There is an obligation to continue to allow the enrichment of the local culture with the contributions of those who arrive here but without allowing these to destroy the basis that defines the true character. And one day, when the residents are in the position to do so, we will rebuild the city for the fifth time, as already in the seventies began the fourth and because the current generation does not have regard for the history from which theyare the beneficiaries and have allowed their heritage to be corroded by negligence.

* Data taken from the book: Puerto Plata, words, colours and sounds by the author Angel Lockward